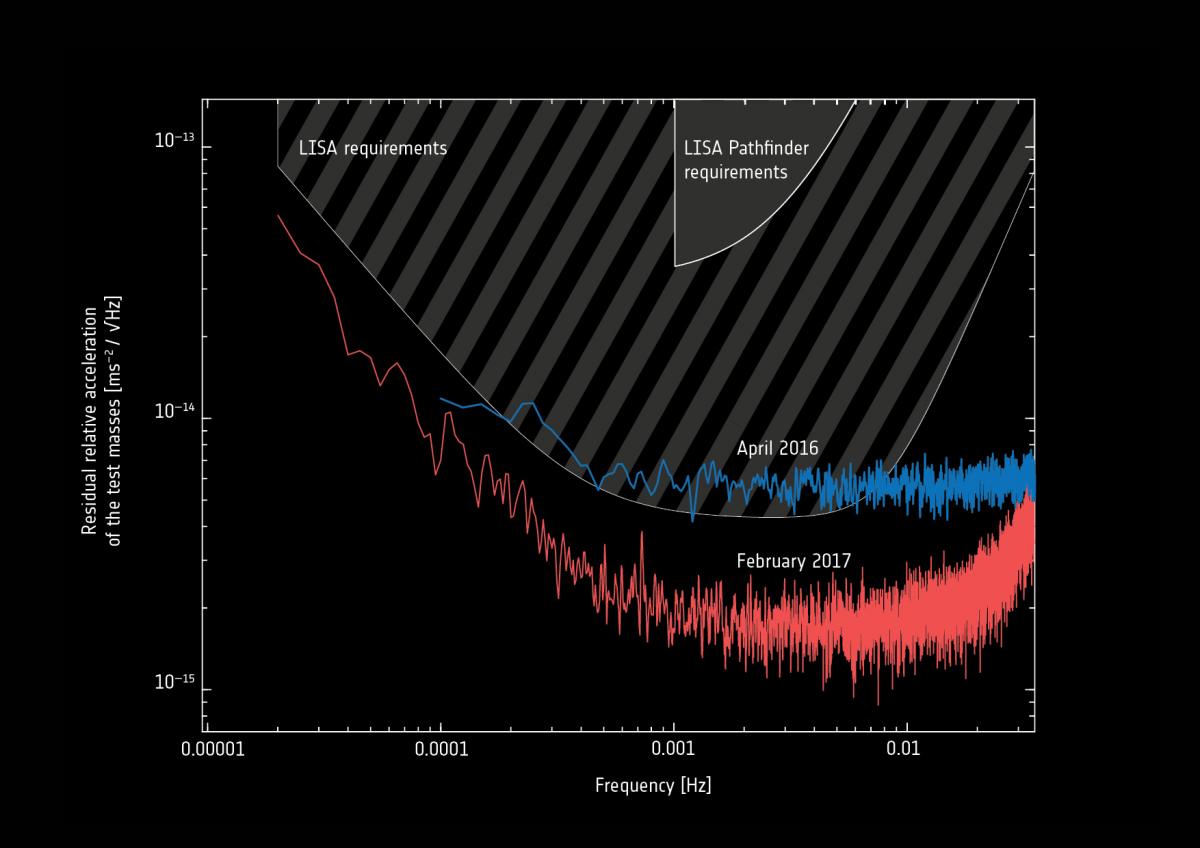 The final results from the ESA satellite LISA Pathfinder (LPF) have been published today. Using data taken before the end of the mission in July 2017, the LPF team – including researchers from the Max Planck Institute for Gravitational Physics in Hannover and Leibniz Universität Hannover – significantly improved first results published in mid 2016. LPF now has exceeded the requirements for key technologies for LISA, the future gravitational-wave observatory in space, by more than a factor of two over the entire observation band. LISA is scheduled to launch into space in 2034 as an ESA mission and will “listen” to low-frequency gravitational waves from merging supermassive black holes in the entire Universe and tens of thousands of binary stars in our Galaxy.

A sight to behold

“LISA Pathfinder beautifully demonstrated the key technologies for LISA, the future gravitational-wave observatory in space: the perfect undisturbed free fall of two cubic test masses inside the spacecraft,” says Prof. Karsten Danzmann, director at the Max Planck Institute for Gravitational Physics (Albert Einstein Institute, AEI) and director of the Institute for Gravitational Physics at Leibniz Universität Hannover, who also is the Co-Principal Investigator of the LISA Technology Package. “We were blown away by the results in the first weeks of the mission, but our final results using more and better data and a deeper understanding of our space laboratory LPF really are a sight to behold.”

While the first LPF results already exceeded the LISA requirements at high frequencies (above 0.01 Hz), the new publication shows that the requirements are beaten by more than a factor of two all the way down to 0.00002 Hz – the entire LISA frequency band.

Two gold-platinum cubes in the quietest place in space

A combination of several effects allowed the LPF researchers to further improve the initial results, reduce the remaining noise sources, and create and even quieter environment for the two cubic gold-platinum test masses:

This demonstration of near-perfect free fall of two test masses over a wide frequency band is a critical benchmark for the LISA mission and future multi-messenger astronomy in collaboration with other (electromagnetic-wave) observatories.

The first ever laser interferometer in space

In addition, the laser interferometer, the first ever in space, performed more than 100 times better than its requirements, and 30 times better than ever in ground-based laboratories. It enabled the detailed investigation of subtle tiny noise sources and artefacts, thus further accumulating experience and building confidence in the laser interferometry for LISA. The construction of the precise optical measurement system was led by scientists of the Max Planck and Leibniz Universität researchers in Hannover.

LISA is scheduled for launch into space in 2034 as a mission of the European Space Agency (ESA). It is supported by many ESA member states as well as NASA and many scientists working together across the Atlantic.

LISA will consist of three satellites spanning an equilateral triangle with each side 2.5 million kilometers long. Gravitational waves passing through the formation flight in space change these distances by a trillionth of a meter.

LISA will measure low-frequency gravitational waves with oscillation periods ranging from 10 seconds to more than half a day, which cannot be observed with detectors on the earth. These are emitted by events such as supermassive black holes with millions of times the mass of our Sun merging at the centers of galaxies, the orbital motions of tens of thousands of binary stars in our Galaxy, and possibly exotic sources such as cosmic strings.

LISA Pathfinder is an ESA mission with important contributions from its member states and NASA. The LISA Technology Package payload has been delivered by several national funding agencies and ESA, in particular: Italy (ASI), Germany (DLR), the United Kingdom (UKSA), France (CNES), Spain (CDTI), Switzerland (SSO), and the Netherlands (SRON). LISA Pathfinder also carries the Disturbance Reduction System payload, provided by NASA. The Max Planck Institute for Gravitational Physics in Hannover and the Institute for Gravitational Physics at Leibniz Universität Hannover are responsible for and coordinate the German contribution to the mission.