Members of Airbus DS GmbH, the Max Planck Institute for Gravitational Physics (Albert Einstein Institute) Hannover, and the University of Glasgow are working on an experiment, based on their LISA Pathfinder heritage, to test imaging system concepts for LISA.

Gravitational wave signals measured by LISA will be superimposed by noise from various sources. Identifying noise sources and suppressing them is a major goal of scientists and technicians working on LISA technology.

A significant potential noise source for the LISA metrology is ‘tilt-to-piston coupling.’ This is the generation of an apparent longitudinal signal resulting from a change in angle between the local and received optical beams, caused by the spacecraft jitter. The primary goal of this activity is to demonstrate that imaging systems are a viable means of supressing tilt-to-piston coupling to 25 µm/rad.

The team aims to demonstrate this by measuring the tilt-to-piston coupling in a representative interferometer. Two imaging systems have been designed based on different modelling approaches – one using conventional ray-tracing methods and one using Gaussian optics – and the theoretical models will be compared to the results of the investigations. 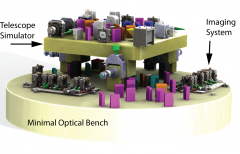 The image shows a CAD model of the experiment comprising an interferometric test bed to study two imaging systems which are designed to suppress tilt-to-piston coupling in LISA. The Minimal Optical Bench has a diameter of 580 mm.

A Telescope Simulator will generate a beam that is representative of a beam from a far LISA spacecraft. This flat-top beam can be tilted to imitate spacecraft jitter and will be directed onto the Minimal Optical Bench to be combined with a local oscillator beam. The Minimal Optical Bench performs the role of the LISA science interferometer, and is interfaced to the Telescope Simulator using a Zerodur tip-tilt adjustable mounting system.

The apparatus will be capable of investigating other aspects of tilt-to-piston coupling such as the difference between using a flat-top compared to a Gaussian beam shape, aperture correction and the effect of quadrant photodiode detector position.