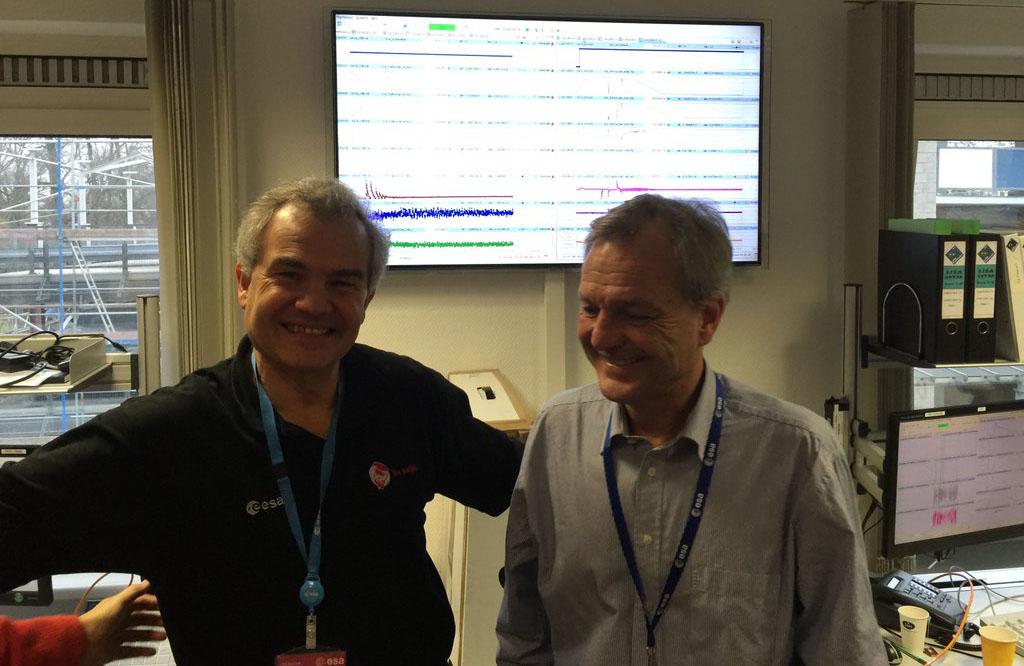 Test cubes floating freely inside LISA Pathfinder
ESA’s LISA Pathfinder has released both of its gold–platinum cubes, and will shortly begin its demanding science mission, placing these test masses in the most precise freefall ever obtained to demonstrate technologies for observing gravitational waves from space.

Launched on 3 December, LISA Pathfinder reached its operational location on 22 January, some 1.5 million km from Earth in the direction of the Sun.

As tests on the spacecraft and its precious payload continue, a major milestone was reached today. For the first time, the two masses – a pair of identical 46 mm gold–platinum cubes – in the heart of the spacecraft are floating freely, several millimetres from the walls of their housings.

The cubes sit 38 cm apart linked only by laser beams. Throughout LISA Pathfinder’s ground handling, launch, the burns that raised its orbit, and the six-week cruise to its work site, each cube was held firmly in place by eight ‘fingers’ pressing on its corners.

On 3 February, the locking fingers were retracted and a valve was opened to allow any residual gas molecules around the cubes to vent to space. Each cube remained in the centre of its housing held by a pair of rods softly pushing on two opposite sides.

The rods were finally released from one test mass on 15 Feb 2016 and from the other a day later, leaving the cubes floating freely, with no mechanical contact with the spacecraft. It will be another week before the cubes are left completely at the mercy of gravity, with no other forces acting on them. Before then, minute electrostatic forces are being applied to move them around and make them follow the spacecraft as its flight through space is slightly perturbed by outside forces such as pressure from sunlight.

On 23 February, the team will switch LISA Pathfinder to science mode for the first time, and the opposite will become true: the cubes will be in freefall and the spacecraft will start sensing any motions towards them owing to external forces. Microthrusters will make minuscule shifts in order to keep the craft centred on one mass. Then the scientists will be in a position to run several months of experiments to determine how accurately the two freely-flying test masses can be kept positioned relative to each other, making measurements with the laser that links them.