The test mass enclosures are mounted in their own vacuum chamber, which supports hardware for caging the test masses and for charge management.

The TM and electrode housings are integrated into a vacuum chamber which contains other hardware crucial to its operation. The vacuum pressure required on-orbit is  10-7mBar. This is achieved by a sealed vacuum enclosure protecting the hardware during integration, testing and launch, which is then vented to space when LPF reaches its operational orbit. Though the vacuum of space is well below this pressure, the presence of a dedicated vacuum chamber is still needed because the spacecraft and rest of the payload produces outgassing at a significant level.

The GRS subsystem also includes fibers that will bring, on command, UV light inside the electrode housing to illuminate the TM and electrode housing surfaces, in order to photoelectrically liberate electrons and move them to or from the TM in order to keep the TM electrostatically neutral.  This will allow periodic or continuous removal of >107 elementary charges that will accumulate on the TM due to cosmic rays and solar particles, which are a source of electrostatic force noise. 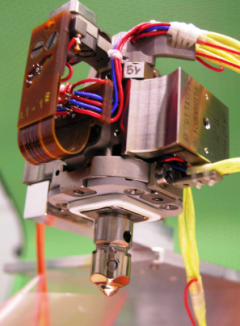 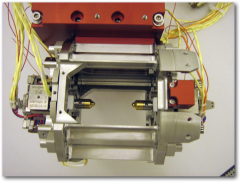 A caging mechanism is also present inside the GRS vacuum enclosure.  This is needed to hold the TM in place, with several thousand Newtons of force, during the vibrationally violent launch.  Part of the mechanism (the Grabbing, Positioning and Release Mechanism -- GPRM -- shown left) must also delicately hold the test mass ready for its release with a velocity of order micron/s or less, such that the small forces applied by the electrostatic actuation can “catch” the TM before it crashes into the walls of the surrounding electrode housing.  This is achieved with a special system for holding the TM at the centre of the housing, with low force and minimal adhesion, and then quickly releasing it.